"Challenging" might be the best adjective for what we all experienced in 2020.  Probate and Guardianship attorneys were also affected by changes to the probate and guardianship rules of procedure.  In an effort to summarize those changes, I authored an article for the Florida Bar Journal.  It seemed like the rules changed faster than we could update our forms and office procedures, but we're adapting. 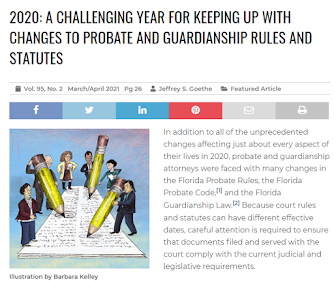 Here's a link to the article:

Posted by Jeffrey S. Goethe at 8:48 AM No comments: 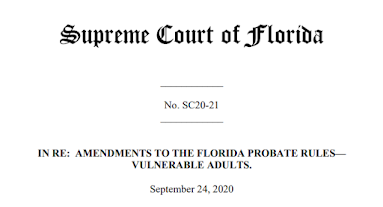 The Florida Supreme Court released an opinion on the Petition of the Florida Probate Rules Committee in Case No. SC20-21. The committee developed forms to implement the protections available in Florida Statutes Section 825.1035. The court adopted the rules as proposed.  The opinion can be found here:

The opinion was effective immediately, It is hoped that the court-sanctioned forms will provide uniformity and efficiency for the process designed to protect some of Florida's most vulnerable citizens.  Even though there was a statutory form, there were reports of courts finding the form legally insufficient.

Posted by Jeffrey S. Goethe at 8:01 AM No comments:

In an effort to standardize and improve certain guardianship forms, the Florida Supreme Court approved new forms proposed by the Florida Probate Rules Committee.  The opinion can be found here:

Posted by Jeffrey S. Goethe at 5:21 PM No comments:

Here's a recent statement from the American Bar Foundation:

An Update from the ABF: The ABF Condemns Systemic Racism

As you all know, the terrible and tragic events of the past few weeks have been incredibly disturbing and heartbreaking.  From the horrific killings of George Floyd, Breonna Taylor, and Ahmaud Arbery to the countless other episodes of explicit bigotry, bias, and brutality, our country is currently revealing the systemic racism that has been with us throughout our history.  There is no doubt that the legacy of our nation’s “original sin” continues to reverberate today.  It is times like these when we must not only take note of the horror and sadness, but also speak out and denounce the hatred and racism underlying recent events.  Let me be clear: We at the ABF condemn racism in all its forms.

Since our beginnings and throughout our history, the ABF has been at the forefront of using the power of ideas to confront injustice and inequality.  Many of our current and former colleagues have spent decades studying and documenting the relationship between law and structural racism and institutional inequality. Their voices and scholarship reflect the ABF’s core values, ideals, and commitments.  Our research matters now more than ever, and I am proud that we as a community continue to speak out on issues of race, racism, and inequality.  As an institution, we should also be proud of the ABF programming that continues to support the research interests of college students and emerging scholars from underserved and underrepresented backgrounds who can be the catalysts for greater diversity, equity, and inclusion in the legal and academic professions.

But as we all know, this alone is not enough. In times like these, we need to continue to reflect upon our ABF mission to expand knowledge and advance justice. As scholars and citizens, we have a responsibility to speak truth to power regarding all forms of racism and inequality. This is at the heart of who we are as an institution.  Through our research, writing, and policy recommendations, we can continue to move the legal system and our broader society toward greater racial equity and justice.

As a community, we will work through these challenging times together. The ABF has always been, and will always remain, a community for all.  It is up to all of us to maintain those ideals. Thank you.

Please be well and stay safe.

Posted by Jeffrey S. Goethe at 9:02 AM No comments: